In their latest special hike&fly issue, Thermik Magazin did a review on instruments.

Here is a sneak peek at their test of leGPSBip+ (see translation in English below) : 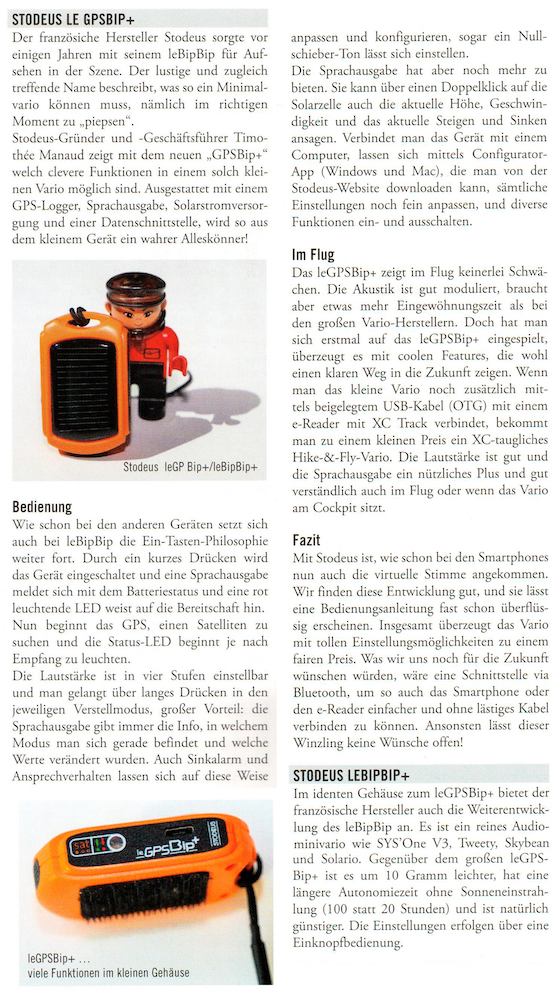 For non-German speakers, here is the translation in English :

STODEUS LEGPSBIP+
A few years ago, the French manufacturer Stodeus caused a stir in the scene with its leBipBip. The funny and attractive name describes what is a minimal vario. It must be able to “beep” at the right moment. Stodeus founder of the company Timothée Manaud shows with the new “GPSBip +” which functions are possible in such a small variety. With a GPS logger, voice output, solar power supply and a data interface, the little device becomes a true all-rounder!
Operation
As with other devices, the single button philosophy continues like leBipBip, with a short press the device is switched on and a voice output announces itself with the Battery status and a red illuminated LED indicates the satellites research. Now the GPS begins to search for satellites and then confirms the reception. The volume can be adjusted in four different stages. A big advantage: the speech output always give information about which mode is currently in and which values ​​have been changed. Sink alarm and response behavior can also be done in this way, even a zero lift tone can be set. But the speech output has more to do. By double-tapping on the solar cell, you can also get your actual altitude, speed and the current ascent or descent. If you connect this device to a computer, with the help of the Configurator app (Windows and Mac), which can be downloaded from the Stodeus Website, can be fine-tuned to suit all settings.
In flight
The leGPSBip + shows no weaknesses in flight. The acoustics are well modulated, but take a little longer to get used to than with the large Vario manufacturers. But once you get used to the leGPSBip +, it convinces with cool features that probably show a clear path to the future. If you also connect the small Vario with the included USB cable (OTG) to an e-reader with XC Track, you get an XC-compatible Hike & Fly Vario for a small price. The volume is good and the voice output is a useful plus and easy to understand even in flight or when the Vario is in the cockpit.
Conclusion
With Stodeus, as with smartphones, the virtual voice has now arrived. We think this development is good, and it almost makes an instruction manual seem superfluous. Overall, the Vario convinces with great setting options at a fair price. What we would still like to see in the future would be an interface via Bluetooth, in order to be able to connect the smartphone or e-reader more easily and without the hassle of a cable. Otherwise, this tiny one leaves nothing to be desired!
STODEUS LEBIPBIP+
In the same housing as the leGPSBip+, the French manufacturer also offers the further development of the leBipBip. It is a pure audio minivario like SYS’One V3, Tweety, Skybean and Solario. Compared to the large leGPSBip+, it is 10 grams lighter, has a longer autonomy time without sun exposure (100 instead of 20 hours) and is of course cheaper. The settings are made using a one-button operation.
By Clarisse - STODEUS| 2020-01-23T14:26:47+00:00 January 23rd, 2020|Magazine|0 Comments

About the Author: Clarisse - STODEUS